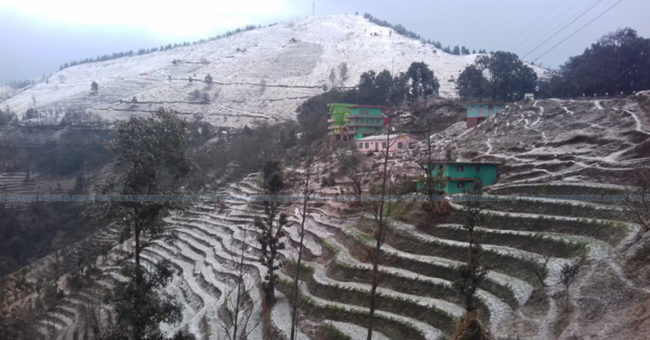 24 Jan, Baitadi  –   Power supply has been obstructed in Baitadi district for the past four days due to wind, rain and snowfall.
According to Power Distribution Centre of the Nepal Electricity Authority, Baitadi, the electricity supply has been obstructed from Monday after the power supply line of 33 KV National Transmission Line was broken following the wind and snowfall.
Problem has surfaced to carry out maintenance of the line due to continuous snowfall and rainfall. Baitadi folks are out of contact and radio service as well as media houses have been affected due to the disruption of power supply.
Similarly, the district witnessed hailstorm, rainfall and snowfall on Wednesday. Transport service along the Dasharath Chand Highway and Jayprithvi Highway has been obstructed following the heavy snowfall, Deputy Superintendent of Police at the District Police Office, Baitadi, Netra Mani Giri, said.