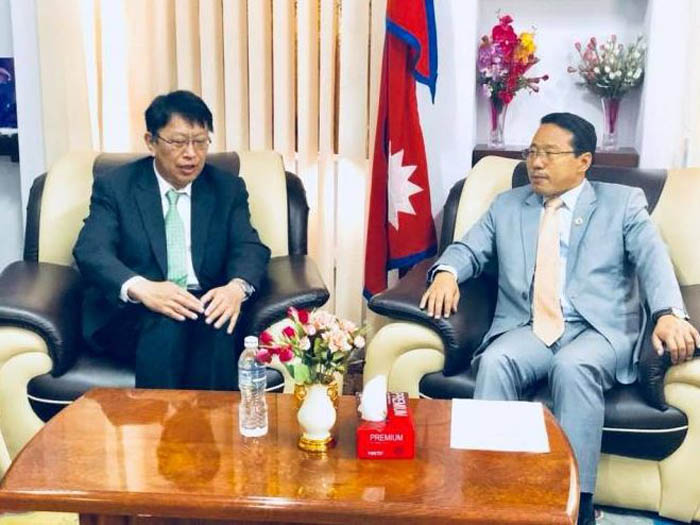 24 Jan, Kathmandu – Minister for Energy, Water Resources and Irrigation, Barshaman Pun, has urged the Japanese government to increase investment in energy and hydropower sector.
During the meeting with a delegation led by Deputy-Director looking after international affairs of the Agriculture and Forests Ministry of Japan, Takami Nakada, at the Ministry, Singha Durbar today, Minister Pun thanked the Japanese government for its technical and financial support to different projects.
He also expressed the belief that Nepal would get additional support in days ahead. Saying Japan is old development partner country of Nepal, Minister Pun thanked the Japan for its support in Nepal’s development, according to Minister Pun’s Secretariat.
Minister Pun further said that role of irrigation was important in development of agro sector of Nepal, adding that the government has been moving ahead some big projects including Bheri Babai and Rani Jamara for the same.
Similarly, Deputy-Director Takasi said that the Japanese government was ready to provide further support in days ahead, saying Japan has been providing economic and technical support to Nepal.
The Deputy-Director said, “We have come here to carry out study and research about possibilities in Nepal. Japan’s private sector is willing to invest in Nepal.” Japanese Ambassador to Nepal Masamichi Saigo was also present on the occasion.