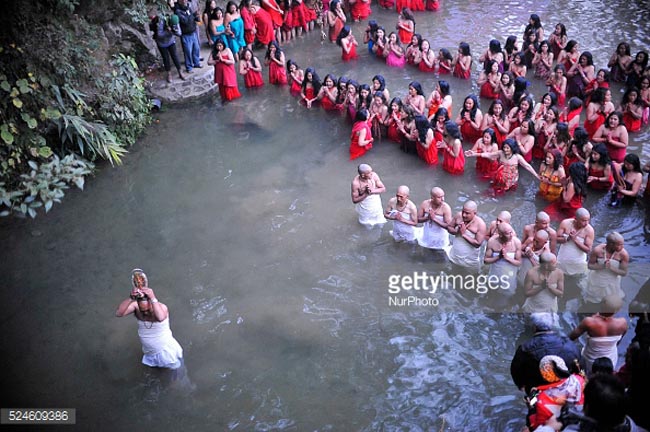 22 Jan, Sankhu – As many as 90 police personnel have been mobilized in keeping with security sensitivity at the recitation of Shreeswasthani and fair on the banks of popular Sali River.
The festival based on the holy Hindu scripture commenced in Sankhu, the north-east city of Kathmandu Valley, on January 21, Monday.
In a bid to avert possible criminal and robbery activities around the fair site, the police squads along with security personnel on plain uniform have been mobilized, shared Laxmi Khanal, Police Inspector, Metropolitan Police Sector, Sankhu.
There is huge flow of Hindu revelers to Salinadi to worship goddess Swasthani and take dips in the sacred river.
Khanal further informed that there might be possible incidents of theft and robbery taking advantage of big crowds so high security vigilance has been maintained in and around the hub.
More than 30 police have been assigned to look after security inside the temple premises in the month-long festival, he added.
A help desk equipped with security personnel has also been put in place to provide support to the needy people.
Likewise, a committee coordinated by Shankharapur municipality Mayor has been formed to monitor the pricing and quality of food items and other goods to be sold out in the fair.
Mayor Subarna Shrestha said that immediate action would be taken if anyone was found with selling sub-standard food items and other goods and charging high prices.
It is expected that around 3 million revelers would visit the fair this time.