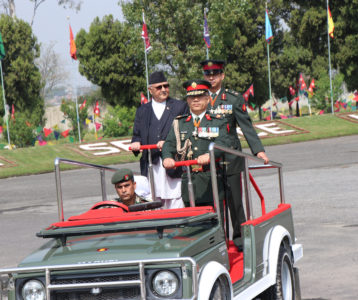 11 April, Bhaktapur: RSS Prime Minister KP Sharma Oli has lauded Nepal Army for its capability to deal with security challenges and various possible security threats of the country. He also stressed the need for increasing NA’s capacity and developing it as the modern army of the 21st century. The PM was conferring ranks and insignias on senior and junior officer cadets who passed the military training amid a programme at Nepal Military Academy, Kharipati today.

“A leadership capable to assess country’s security challenges and save the nation from them,” he said. Clarifying that Nepal Army has been carrying out remarkable activities in protecting national unity and welfare, the Prime Minister said, “The Nepal Army has always been establishing itself as a professional and disciplined organisation under the constitutional government.” He further praised the NA for active roles in disaster management in the country, nation building, expanding its relations with the people in its organisational capacity. 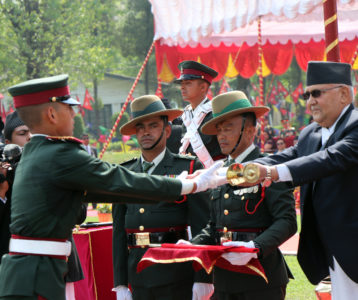 PM Oli congratulated the total 77 officer cadets including two each from Kenya and Maldives on having passed the military training. He also handed awards to top-scorers in the training session. Those who received the awards include Sanjog Karki, Dhan Hari Rai under junior category, Sangita Adhikari under women category and a Maldivian citizen. The event was attended by also Deputy Prime Minister and Defence Minister Ishwor Pokharel, chief of state 3 Anuradha Koirala and high-ranking officials of security bodies.