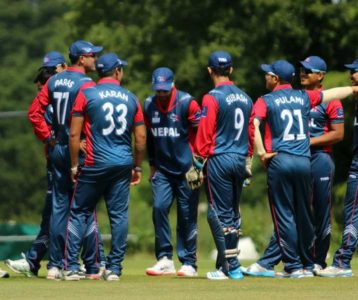 16 April, Kathmandu : Nepal defeated Oman by 150 runs in fourth match under ICC Asia U-19 World Cup Qualifier held at Selangor Truf Club of Malaysia today. Invited to bat first after losing the toss, Nepal made 229 runs in 43.2 overs by losing all wickets.

Pawan Sarraf took three wickets while Surya Tamang and Pratish GC took two wickets each. This is the third win for Nepal in the four games it has played so far under ICC Asia U-19 World Cup Qualifier.

Nepal will play with Kuwait in the final match on April 18. The winner team would participate in the ICC U19 Cricket World Cup 2020 taking place in South Africa.